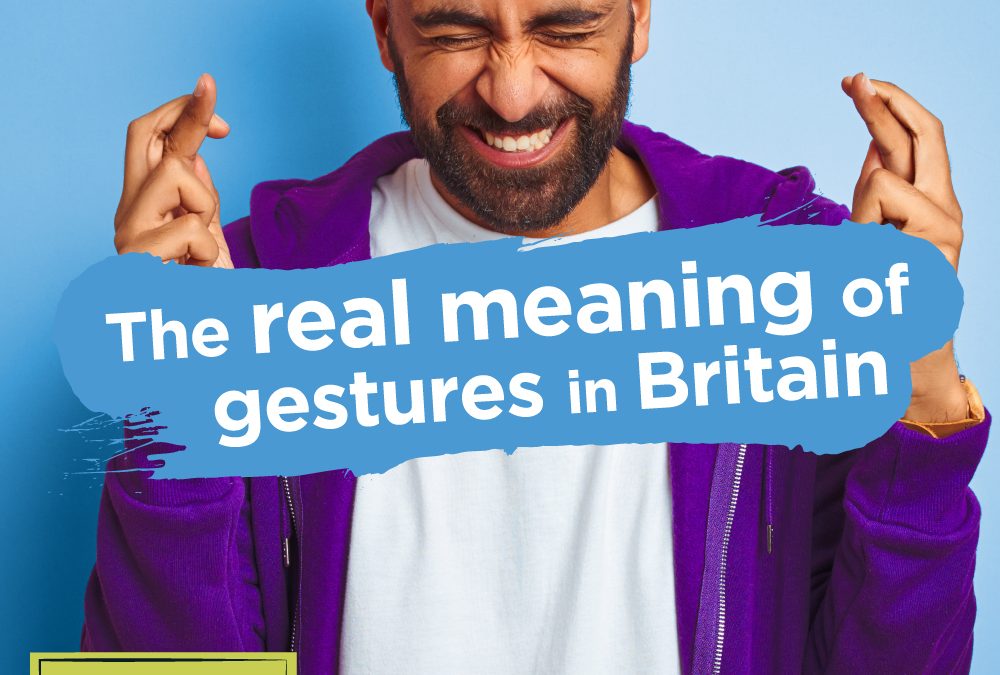 Hand gestures are very important in communicating with other people. When we think of nationalities with important hand gestures we often think about the Italians. The British aren’t very famous for using their body much whilst communicating. However surprisingly, there are over fifty common hand gestures used in the U.K!

Many of these are common in many western countries but some of them can be easily confused or misinterpreted so you have to be careful when and where you use them.

Here I have included a few of the most used gestures in and around the U.K.

Firstly, let’s start with probably the most confusable gesture of them all. Holding up your two fingers can mean lots of different things. If you hold up your hand with the palm facing the other person, this usually means either ‘two’ for example; ‘I would like two coffees please’.

It can also mean ‘peace’; for example ‘Peace and love man!’.

However, if you turn your hand around – still holding up your two fingers but this time with the back of your hand facing the other person – this means something entirely different!

This is a very rude gesture to mean something like ‘up yours!’ or ‘f*** you!’ which can be extremely insulting to someone you don’t know.

It is not always used aggressively though, you might see friends ‘giving the V sign’ to each other as a joke but you will also probably see an angry cyclist show it to a taxi driver amongst a concerto of car horns.

We can touch our nose to mean this. Usually, this is done after somebody asks you a ‘nosy’ question. For example, “What did he just say to you?” and you can reply by tapping your nose if you don’t want to tell them.

To do this gesture, you usually wrap your index finger and your middle finger around each other. This is a common phrase for wishing ‘good luck’. When you do this gesture it is usually because you are nervous about doing something or you are worried that something might not happen. When we do this gesture we can also say ‘fingers crossed’ while crossing our fingers for extra good luck. For example ‘England are going to win the World Cup, fingers crossed!’.

Probably the most common gesture is the thumbs up. You do this my closing your fist and sticking up your thumbs.

This is quite common in most of europe so you will probably be familiar with this one. It can mean a variety of things that are positive. For example, you could put your thumbs up to mean ‘yes’, ‘sure’, ‘good job’, ‘really good’ etc.

The Best Parks in London