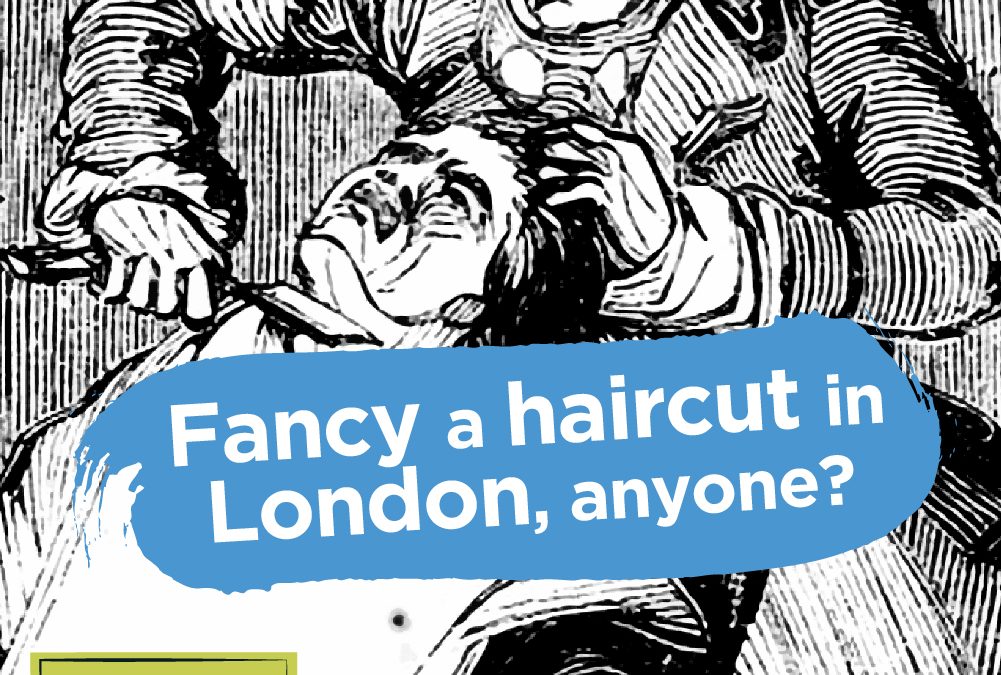 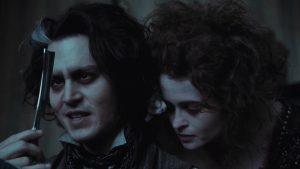 Now, I am sure that you have heard of ‘Jack the Ripper’, one of the most famous serial killers in Victorian London. ‘The Ripper’ remains to this day a fascinating enigma for many people because we are still unsure who the actual character was.

Historians believe that Jack the Ripper killed at least 5 female prostitutes but did you know that there is supposedly another London legend, way more gruesome than Jack the ripper? This was the worst serial killer of them all, Sweeny Todd, the Demon Barber of Fleet Street’.

Ghoulish fact or fiction, you decide?

You may have seen the musical, you may have even seen the movie, ‘Sweeny Todd, the Demon Barber of Fleet Street’ starring the fab Johnny Depp and Helen Bonham Carter but did you know that our ‘Demon Barber’ was so much more barbaric than our infamous ‘Jack the Ripper’. 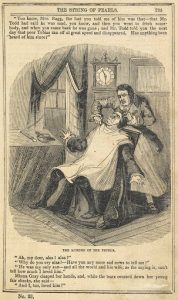 As it happens, the name Sweeney Todd appeared in a Victorian magazine in the 19th century called the ‘Penny Dreadful’ complete with his catchphrase, “See how I polish ’em off!” or ‘see how I kill them’ in today’s language. Todd was supposedly the creation of an English writer called Thomas Preskett Prest.

T.P.Prest first introduced the story of ‘Sweeney Todd-The Demon Barber of Fleet Street’ within an eighteen-part series named the ‘The String of Pearls: A romance’ in 1846, and for many historians, Sweeny Todd has always been dismissed as exactly that – just a story.

Yet, for one historian and Sweeny Todd aficionado, P. Haining, he argues that the Demon Barber is no urban myth and the person, as well as his numerous killings, are very real. After many years of research, Haining argues that actual real-life events that happened about 44 years previously to Todd’s first appearance in the Penny Dreadful, were to stimulate him being featured rather than the imaginary character of ‘Sweeny Todd, The Demon Barber of Fleet Street’ having been invented for the Penny Dreadful.  It was called the ‘Penny Dreadful’ because it cost one English penny to buy.

An actual person called Sweeney Todd was born on October 26, 1756, in the slums of Brick Lane, East London, near Spitalfields.  His mother and father both worked and weaved silk but his father was a drunk who beat both him and his mother a lot. Whilst very little is documented about Todd’s childhood, nonetheless, his life abruptly changed in 1770, when he was jailed for five years for petty theft. Although Todd’s actual crime was not recorded what was recorded though was that a person by the name of Sweeny Todd went to London’s Newgate prison at the age of 14.

Like many prisoners at this time, Todd was beaten, punished, and abused but he eventually became employed by the Prison’s barber, his master, an old man called Plummer.  Whilst in prison, Todd was to learn his trade and as an apprentice, he shaved those guilty men before they walked to the gallows to be hung. Did you know that the U.K did not abolish Capital Execution or hanging until 1964? It is recorded that Sweeney Todd left Newgate prison in the autumn of 1775 and soon found employment with a local Barber. Within five years of leaving prison, he had earned enough money to open a shop near Hyde Park Corner.

However, an unusual event published in the local newspaper, the Daily Courant (later the Daily Gazette), in December 1784 was that ‘A young gentleman was found dead close to a barbers shop with his throat cut from ear to ear’. The murderer was never found. Was the murderer Todd?

Although we cannot be certain for sure Todd did say after his arrest many years later that “my first ‘un was a young gent at Hyde Park Corner. Slit him from ear to ear, I did.” In his confession he was to say that a young gentleman was to come into his shop, and whilst he was having a shave and a haircut he boasted to Todd about his sexual exploits from the night before. By the description and name given to Todd by the young gentleman, the woman was in fact, Sweeny Todd’s lover.

The exact location of Todd’s shop is still disputed to this day but new evidence was to suggest that the likely location is 186 Fleet Street, beside St Dunstan’s Church. His shop was in close vicinity of Bell Yard and there was a pie shop on the other side of the Church. All 3 places were interconnected by dark passageways and underground tunnels. Todd paid £125 for the lease on the shop and advertised his dual role as a barber/surgeon with the famous white & red striped pole which you still see today outside most barbers shop in the UK.

Below, and still very common today are the barbers’ red and white poles. Sometimes you’ll also see the colour blue amongst the red & white as well. Blue denotes the colour of your veins which were cut in the archaic practice of bloodletting. 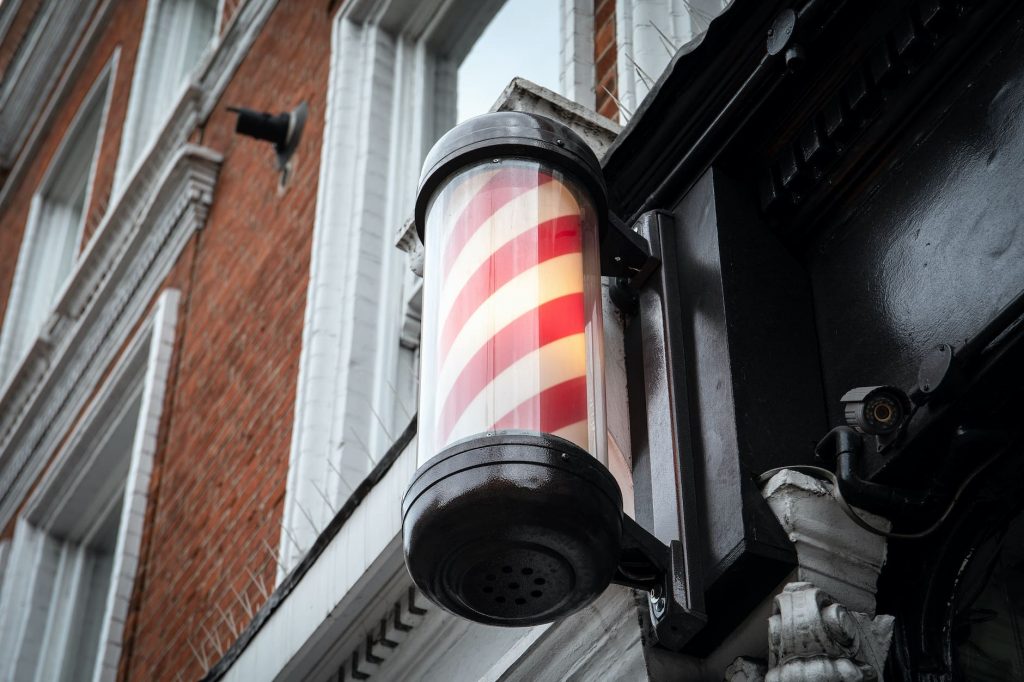 Now, did you know that in the19th-century your local barber was not only a hairdresser but also your surgeon too!  Before the 2 trades (barber & surgeon) became separated by King George II (5 x great grandfather of the Queen) in the 18th-century, people went to their local barbers for minor bodily problems where the barbers would perform small operations. The red on the pole depicted blood whilst the white on the pole represents a bandage with which the patient was bound after an operation. Common for that time, Todd’s window would have displayed jars filled with coagulated blood and rotten teeth. These were to advertise the barbers’ skill at pulling teeth and bleeding clients.

The second killing attributed to our ‘Demon Barber’ was again committed in Fleet Street. An article in the Daily Courant/Daily Gazette, April 14, 1785, reported the murder of a young gentleman who was talking with a man supposedly dressed as a barber. The Newspaper reported that “The two men started to argue and all of a sudden the barber took out his razor and slit the throat of the young man and disappeared”. Not known at that time, Todd was also to kill 4 people around the same time with which 3 of them, a pawnbroker, petty thief, and a share dealer were the last to die in the vicinity of Todd’s shop rather than actually in his shop.

Todd is often depicted killing his clients in his barbers’ chair but this may be historically incorrect as there is only one authentic account of a victim being murdered in the barbers’ chair.  The report was made by a man whose father had been killed by Sweeney Todd around 1798. Thomas Shadwell, a security guard at St Bartholomew’s hospital, was robbed of a gold pocket-watch which was later recovered from Todd’s barbershop.

Now enters Todd’s accomplice, Mrs. Lovett, and her infamous pie shop into our story. For many historians and academics, the character Mrs. Lovett is just as controversial as our main character Sweeny Todd but it is believed that Margery or Sarah Lovett was a young widow when she became involved with the ‘Demon Barber’. Although the historical records are a little scarce as to how Todd and Lovett met, fell in love, and why they started their killing spree but for what is about to unfold is truly terrifying.

Ultimately, it was the smell of rotting flesh from St Dunstan’s Church that was the undoing of Sweeny Todd & Mrs. Lovett. The Daily Courant/Daily Gazzette reported: “A dreadful smell would make itself most painfully and disagreeably apparent” from the vicinity of Todd’s shop along with the rumors of many people especially sailors disappearing.  The terrible smell, as well as those mysterious disappearances, were to catch the attention of the local Police or the ‘Bow Street Runners’, as they were called then.

Todd’s shop was eventually put under surveillance and it wasn’t until the Bow Street Runners searched the tunnels of St Dunstan’s Church, adjacent to his shop and basement, they were to find a disused family vault with the recent remains of many human bodies. This then led to the police raiding Todd’s shop where they found a lot of different types of clothing and valuables such as gold watches and rings. Although Todd wasn’t present when the police searched his shop, the arrest of Mrs. Lovett lead to her confessing everything. Although Mrs. Lovett went to prison she never stood trial for her crimes because she was to kill herself with poison in her prison cell.

As to whether or not Sweeny Todd existed or even committed murder, subtitled in the Malefactor’s Bloody Register within the Newgate (Prison) Calendar’s weekly accounts of sensational trials, it was denoted that a one, Sweeny Todd, was charged at the Old Bailey with a single murder. His victim, Francis Thornhill. The Attorney General for the prosecution described how Thornhill had been tasked to take a string of pearls worth £16,000 to a young lady in London.  On his way to deliver them, he popped into Todd’s barbershop and was never seen alive again. Todd was to pawn a string of pearls for £1,000. Furthermore, the prosecution presented a leg bone found in the church vaults which belonged to Francis Thornhill. Thornhill’s surgeon, Sylvester Steers, was to previously treat Thornhill for a fracture and upon inspection recognized the bone he fixed for his patient.

To conclude the case, the Attorney General told the court that numerous pieces of clothing were found in Todd’s shop, in fact, pieces of clothing for a whopping 160 people. It was later discovered that after killing his customers, Todd dropped their bodies through a trapdoor to his basement where he would eventually carve them up cutting off the arms and legs and then slice the soft flesh from the torso. This and other body parts like the heart, liver, and kidneys were carried along the tunnels to Mrs. Lovett’s bakery beneath her shop. At this point, they became part of the meat fillings that Mrs. Lovatt’s packed into her famous savory pies.  According to many eyewitnesses, Mrs. Lovatt’s savory pies were extremely popular with her customers and they were always well sought after.

Sentenced in 1802, Sweeney Todd was taken from his cell in Newgate on the morning of January 25, 1802, and hanged by the neck until dead on a portable scaffold in front of a jeering crowd of thousands. He was 46 years old.

For our historian P. Haining and Sweeny Todd aficionado, he suggests that it was the murder of Francis Thornhill’s and the subsequent trial of an actual person called Sweeny Todd this was to inspire the publication of the ‘String Of Pearls’, which featured Sweeny Todd some 44 years after his execution in 1802. Haining argues that for a crime of this magnitude the writer Thomas Preskett Prest, like many, many others, would have been very familiar with the stories and legends that were in circulation about the ‘Demon Barber’. So rather than Sweeny Todd being a fictitious character sensationalized in the ‘Penny Dreadful’ invented to scare and shock the working classes, he was in fact, the real deal.

Finally, and not forgetting though, that if indeed our historian Haining is correct, we are left with the horrifying truth that one man killed at least 160 people during his 20-year reign of terror and introduced an unsuspecting community to cannibalism.  Food for thought don’t you think?

5 Curious Things About London That You Probably Don't Know

4 Reasons London Still Has Opportunities For You

The Queen’s Platinum Jubilee- What is it and what is happening?